On Wednesday 19 August 1942, more than six thousand allied soldiers, mostly Canadians, stormed ashore at the seaside resort of Dieppe in German-occupied France. The purpose of the raid was to gather intelligence and to destroy important infrastructure.

The same morning the Norwegian pilot Helge Sognnaes took off from North Weald Air Force Base north of London. He flies a Super Spitfire Mk VB with registration number AR293. The mission is to protect vessels participating in the raid against Dieppe.

Five minutes after noon, Sognnaes finds himself in battle with two German bombers in the airspace north of the Dieppe. He attacks one of them dead astern, and gives him a five second burst both with his canon and his machine gun. The distance when he opens up is approximately 200 meters. Sognnaes pulls up, and can see direct hits in the fuselage of the German aircraft. One of the engines catches fire and after a new attack from Sognnaes, the aircraft crashes into the sea.

In June 1942, Sognnaes damaged a German fighter, but the German bomber over Dieppe was his first kill. Helge Sognnaes was from Bergen, and belonged to the Norwegian 331 Squadron. He continued to shoot down German aircraft, and became one of the squadron’s aces. The requirement to obtain the title of ace, is five kills. Helge’s result was six, plus one shared.

On the evening of 2 May 1943, he was in battle with a Focke-Wulf-190 over Walcheren. The German attacked one of the other aircraft in Helges formation, and didn´t see the Norwegian Spitfire before it was too late. He went into a nosedive, but Sognnaes followed. From a distance of 3-400 meters, he shot several bursts with his machine gun, and saw the impact in the fuselage of the German fighter plane. The aircraft spun out of control and after a few seconds Sognnaes saw the plane hit the water. This was his fifth kill.

The 22 June 1943 would be Helge’s last flight. This day a massive allied air attack was conducted against targets in Germany, Belgium and The Netherlands. Simultaneously two diversionary attacks were directed against Antwerp and Rotterdam. 42 bombers attacked the Belgian port, while a small group of 12 B-25 bombers attacked targets in the port of Rotterdam. The aim of the supporting attacks was to spread the German fighters to a maximum. 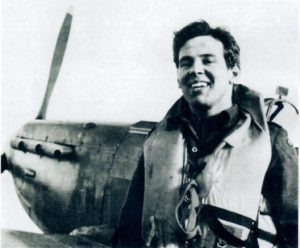 More than twenty allied fighter squadrons were in the air to protect the bombers this day. Early in the morning, nine aircraft from 331 Squadron transferred from North Weald to Martlesham east of Ipswich to be ready to meet the bombers in the air over The Channel.

Under the leadership of major Rolf Arne Berg they took off again at 7:42. The mission was to protect the bombers attacking the port of Rotterdam. Helge Sognnaes flew in a section headed by Sven Heglund. Heglund would end the war as the squadron’s top ace with 16 downed aircraft.

In the German fighter base Woensdrecht in the Netherlands the alarm goes off when the Allied attack on Rotterdam is detected on the radar. Twenty-two FW-190 fighters take off and head in the direction the port. One of the pilots is Oberveldwebel Reinhard Flecks.

The Norwegian fighters reject several attacks on the bomber formation, and the attack on Rotterdam was completed as planned. However, on the return flight they meet the German aircraft from Woensdrecht again. The encounter evolves into a real dogfight.

Sven Heglund can see the Spitfire with Helge Sognnaes in the cockpit beneath him. He has a FW-190 on his tail. Before Heglund can warn his classmate from pilot school, the

aircraft is hit by shells from the German plane. The FW-190 is piloted by Reinard Flecks.

By the village of Nieuwendijk, a group of Dutch farmers are busy putting up fence posts. Suddenly they can hear heavy firing from the air. Moments later they can see an aircraft swirling down “like a leaf from a tree.” It is Sognnaes’ Spitfire. Flecks has inflicted a direct hit that blows the whole tail of the Norwegian Spitfire. The plane hits the ground and aircraft components are spread over a large area. The smiling and cheerful fellow from Bergen was no longer. Sven Heglund felt both helpless and guilty. Helge Sognnaes was 22 years old (By Knut J Støvne, Frilans journalist).

Helge, sixth from the left. 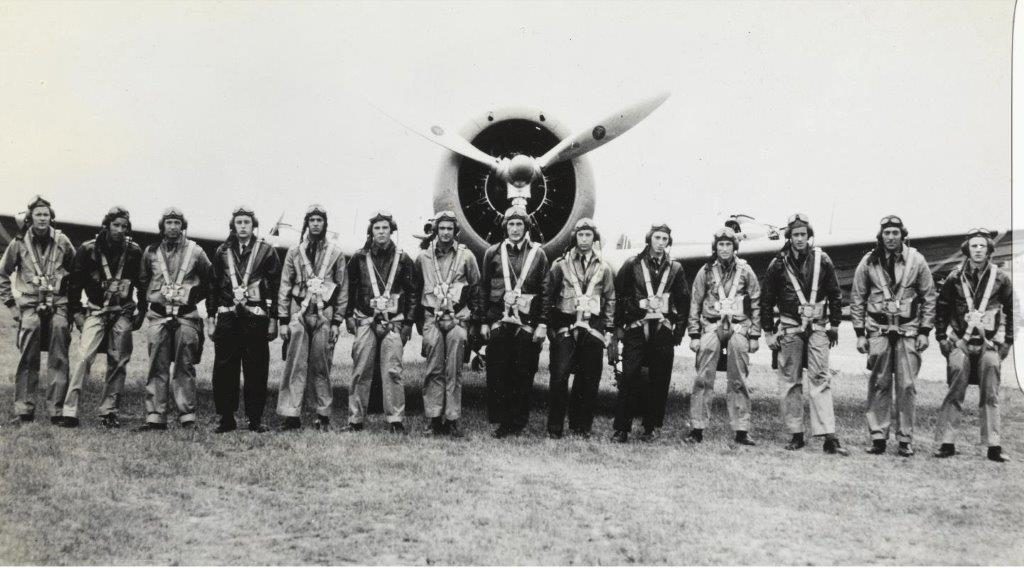 Helge, sixth from the left

After the crash, Helge Sorgaess was buried at the Crooswijk cemetery in Rotterdam. In
In 1946 he was cremated in Rotterdam at the request of his family, after which his ashes were sent to his family in Bergen Norway.