Paul was born at Woodthorpe, Nottingham, England. His father was a wholesale dealer in potatoes and vegetables. As a young boy Paul went to a boarding school in Stonehouse, Gloucestershire. He was a popular and talented student as well as pianist and organist.

In 1941 he joined the RAF and was sent to Canada for his training as a pilot. After taking his pilot’s licence early in 1943 he returned to England and was posted with RAF 90 squadron at Tuddenham, Suffolk, England. From here he flew many sorties with his crew of 6 to occupied Europe. Especially France and Germany were the targets of his bombing sorties, often in large groups of Lancasters.

On September 16, 1944, at 10 o’clock in the evening Paul left England with 26 Lancasters of 90 Squadron for a flight to the bridges at Moerdijk, Holland. Another group of 24 Lancasters of RAF 115 and RAF 75 squadrons joined the formation. About 23.45 o’clock they arrived over the target and dropped their bombs. On account of the darkness, it was difficult to see who flew where and Paul’s Lancaster clashed with a Lancaster of 115 squadron. Both planes went down. Paul’s Lancaster LM 169 broke up and crashed in the Strijense polder near Strijen-Sas. The other Lancaster, LM 693, came down in the nearby Maria polder. Paul’s Lancaster happened to come down in an area flooded by the Germans, and because of this the bodies of Paul and his crew of 6 could not be recovered immediately.

After the liberation of Holland, the burgomaster of Strijen, Mr. Bolman, told an American officer that outside Strijen there were still remnants of a Lancaster and that the bodies of the crew had not been recovered. In the meantime the area where the remnants of the Lancaster lay had been drained.

The American went there with a number of his men, recovered the remains of the crew, among  them Paul Tooley, and put them in coffins. These were then taken to the cemetery of “De Essenhof “ in Dordrecht, where they were buried with military honours on June 25, 1945. 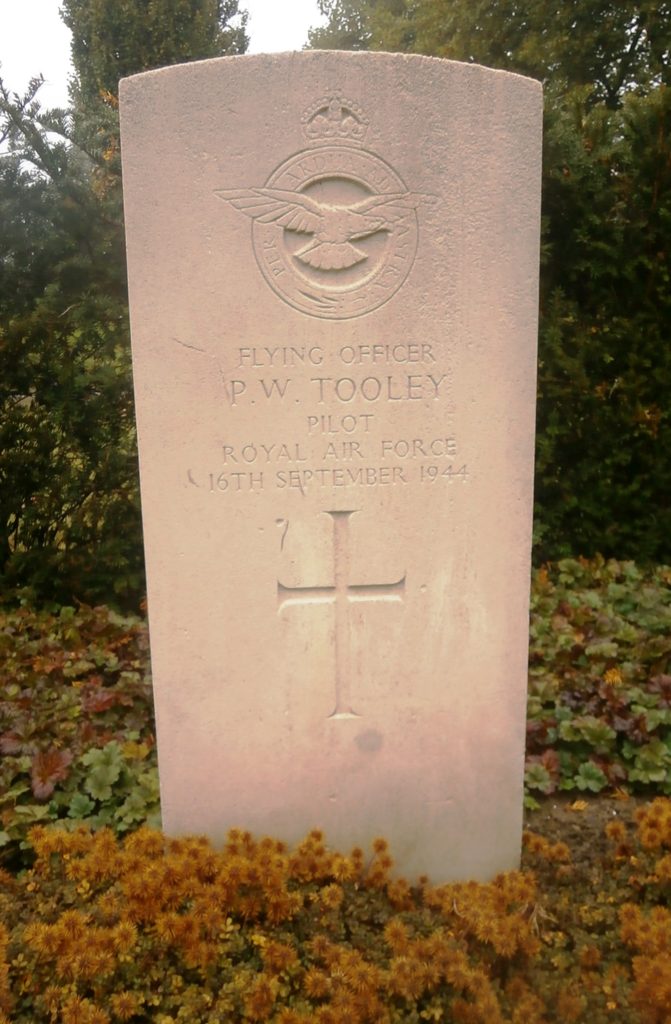