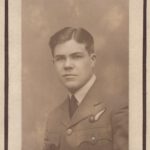 David Selwyn Thomas was the son of John Llewellyn Thomas and Sarah Bowen of Tŷ Rheola, Gendros.  He was born at Bryn y Babell, Cwmdu, on 7 November 1924 and was known as Selwyn. Selwyn Thomas was educated at Gendros School from where he was an awarded a scholarship to Swansea Grammar School.  He sat his matriculation examinations in 1940 and in the same year joined Barclays Bank Ltd.  He was posted as a junior cashier to the bank’s Pontardawe branch in the Swansea valley.  He was a fine sportsman and played both rugby and cricket for his school and the Swansea junior teams. Selwyn Thomas enlisted as an aircraftsman with a view to gaining a commission in the Royal Air Force and, after recruit training, was selected for Airman Aircrew training as a Signaller.  He was promoted to the rank of sergeant at the end of his training in 1943 and was selected for a cadetship in the Royal Air Force and training as a pilot.  But he turned down the opportunity, choosing to enter operational service at the earliest opportunity.  He was accordingly commissioned as a Signaller in the Royal Air Force Volunteer Reserve in the rank of pilot officer.  After further flying training was posted in the rank of flying officer to an operational conversion unit in preparation for his posting to No 90 Squadron, Bomber Command. In 1944 No 90 Squadron was engaged on several fronts, including the Battle of the Ruhr.  It was sent to many of the German targets that were most heavily defended, including Berlin.  The squadron had suffered considerable losses and found it difficult to maintain reserves of men and machines at a time when it had been equipped with Lancasters. Selwyn Thomas joined the squadron in mid-1944 and was assigned to one of the crews charged with preparations for a night-time attacks on the German forces. The squadron was declared operational in June 1944 and Selwyn Thomas’ crew prepared for their first operational sortie and attack. Selwyn Thomas was killed in action during the night of 16/17 September 1944, flying in air operations in support of Operation Market Garden. 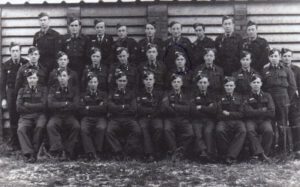 It was his first operational sortie. 16 September 1944 is a date of great historical importance.  The day marked the beginning of the largest air operation of the Second World War, Operation Market Garden, better known as the Battle of Arnhem.  To safeguard the aircraft planned to transport paratroopers to Arnhem and Nijmegen the following day, the Royal Air Force carried out two pre-emptive raids on the night of 16/17 September.  The first group comprised 223 aircraft (200 Lancasters and 23 Mosquitoes) and was tasked with bombing the airfields near the towns of Leeuwarden and Steenwijk (in the Netherlands) and Hopsten and Rheine (in Germany).  The second group comprised 59 aircraft (54 Lancasters and 5 Mosquitoes) were tasked with attacking flak positions and the railway bridge near Moerdijk, south of Dordrecht.  Selwyn Thomas flew in Lancaster LM169 of the second group of aircraft. 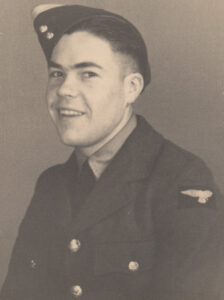 The second group carried out its raid between 22.51 hours and 23.05 hours, dropping 294 tons of high explosive bombs and twelve 250-pound marker bombs near to the town of Moerdijk; in addition, they also deployed flares.  The attack was not completely successful; the bombs succeeded only in cutting off the roads leading to the German positions. At the conclusion of their bombing runs, each of the attacking aircraft turned, climbed and headed for the safety of the North Sea and thence to their home airfields.  But during this manoeuver a flying error caused a mid-air collision between two Lancasters: LM169 from No 90 Squadron and LM693 from No 115 Squadron.  The two aircraft were severely disabled and spiralled into the ground, and both crews were killed on impact.  Selwyn Thomas’ aircraft crashed into the flooded Stoope polder near the village of Strijen; LM693 crash-landed in the Maria polder near the village of Strijen. The bodies of the crew of LM169 were not recovered until the following spring when the Stoope polder was drained.  The burial party was drawn from the United States Army on july 21 1945 who accorded 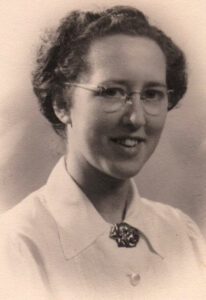 the crew military honours, covering the coffins with the Union flag when their work in the polder was complete.  The coffins were subsequently taken for burial in the Allied plot in the Essenhof cemetery at Dordrecht in the Netherlands. Selwyn Thomas was posted as missing, believed killed in action.  After the War, Miss Hendrina Timmers of Dordrecht wrote to the Mayor of Swansea to say that she knew of the grave of an airman whom she believed was from Swansea.  She explained that while his name was unknown, the cemetery’s records showed that he was from Swansea.  She also placed an advertisement in the South Wales Evening Post in her search for the name and address of the airman.  Her enquiries were successful, and in 1947 Miss Timmers visited Selwyn Thomas’ family in Fforestfach.  She also visited the Guildhall to thank the Mayor of Swansea for his efforts in support of her enquiries. Selwyn Thomas was unmarried.  He was survived by his parents, his elder sister, Margaret Verina Hocknell and his elder brother, Ambrose Bowen Thomas. Selwyn Thomas’s name is commemorated on the headstone of the grave of John Llewellyn & Sarah Thomas in the cemetery at Bethlehem Chapel, Cadle, Fforestfach.  His name is inscribed on the Fforestfach War Memorial. 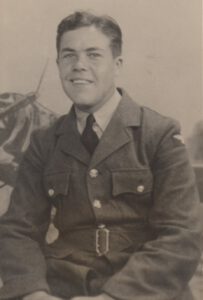 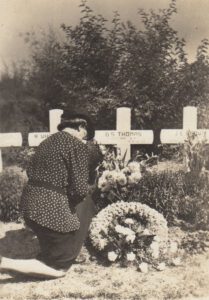 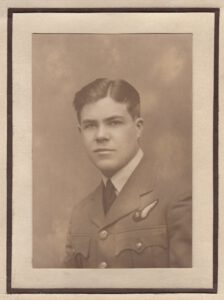 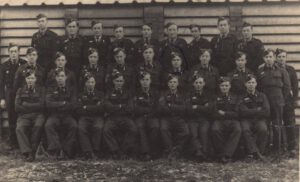 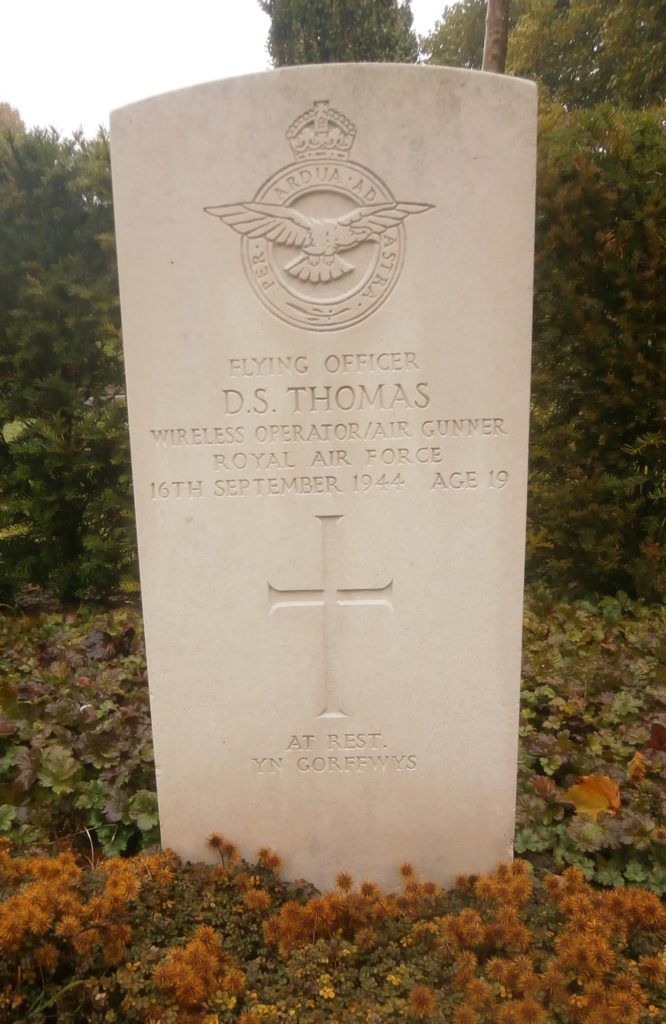 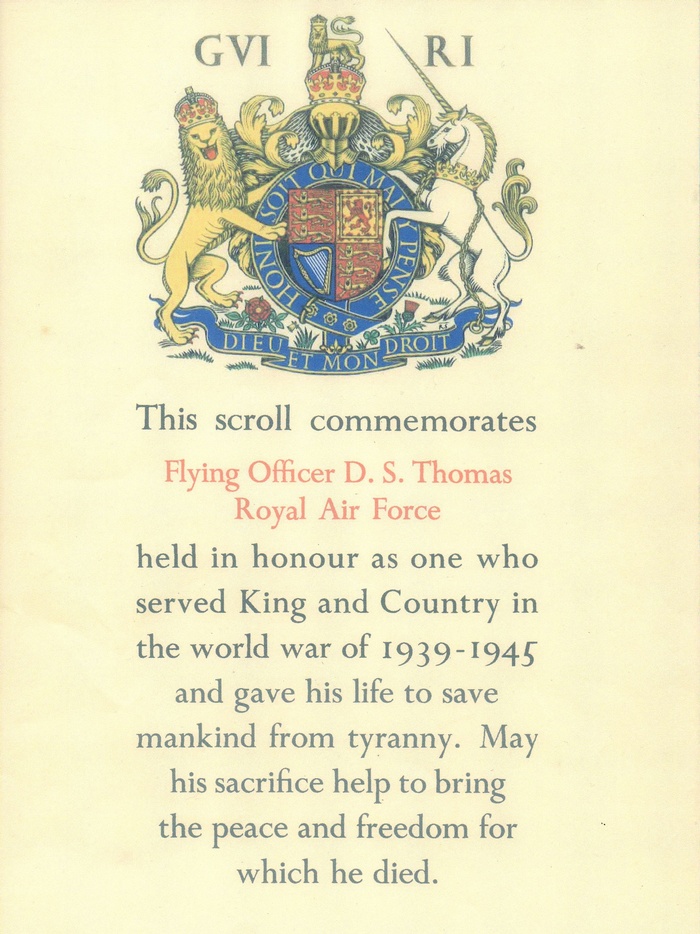 The grave of David’s parents, at the Capel Bethlehem cemetery in Cadle, refers to his grave in Dordrecht. The text is written in Welsh, Stuart Hocknell made this photo in December 2016: ,,The chapel is now closed and the cemetery much neglected and subject to vandalism. Selwyn Thomas was posted “missing believed killed in action” and his family lived in hope that he was in hiding and looked after by the Resistance.  The father of the aircraft’s captain wrote repeatedly to the families of the crew members to say that he was convinced that the crew was safe and in hiding.  When eventually their fate of the crew became known, the families assumed that the airmen had been shot. I was about 6 years old at the time and imagined that my uncle was shot as he descended by parachute from his stricken aircraft.  This was my understanding until I visited crash site in the Stoope polder.  I am glad that my grandparents and mother never knew the truth of what had happened”.

The memorial to Selwyn Thomas on the grave:

Also David Selwyn Thomas / Flying Officer RAF, son of the above / who lost his life and is buried  in Dordrecht, Holland, 16 September 1944 / at age 19 years

We will meet again beyond the grave 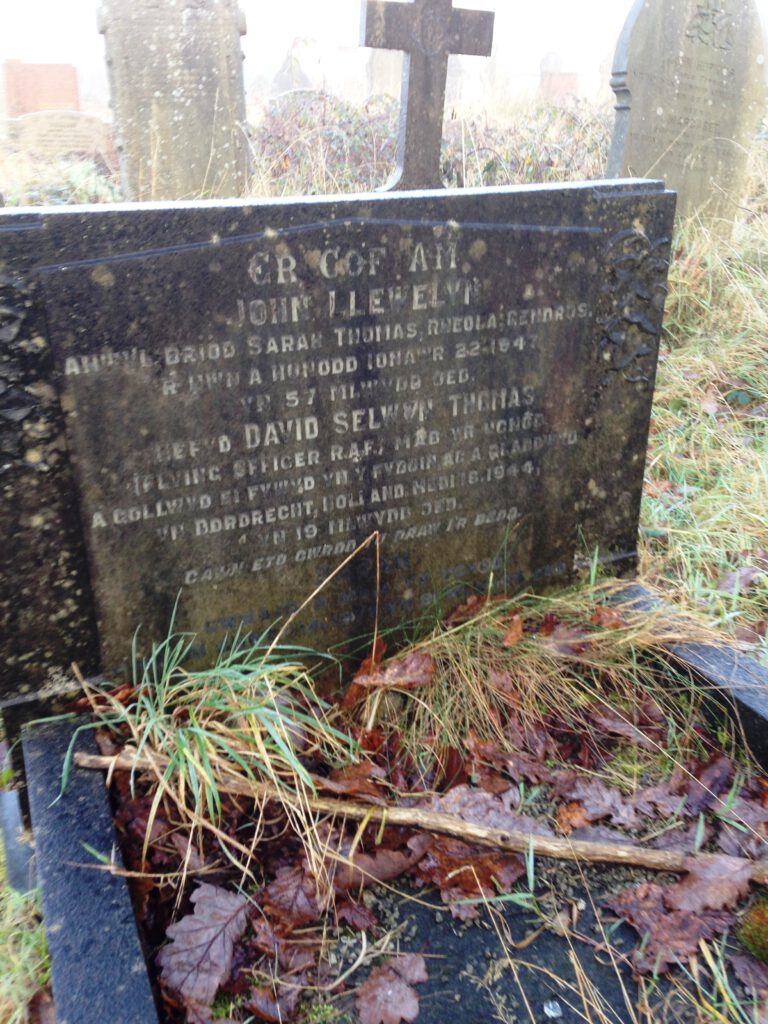