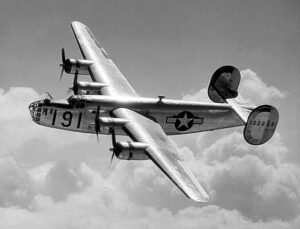 Early in the morning 24 American bombers, type B 24 Liberator, of 392 Bomb Group, take off from the English base of Wendling, going to their target the German city of Bremen.  One of these planes is the CI-R, reg.nr. 427540 belonging to 567 USAAF Bomb Squadron. After take-off the plane seeks its place in the formation. When it descends below the clouds and vision becomes clear, it cannot perceive the other planes and therefore decides to return to base. Approaching the Dutch coast the plane tries to turn around, but flying over the Moerdijk bridge it is hit by German AA fire.  The plane then flies on to Rotterdam, where it again turns around. Because two of his engines are on fire, the pilot knows he cannot get back to England anymore and he orders his crew to jump out. Seven crew indeed jump and hanging on their parachutes, land in Hoekse Waard between ‘s Gravendeel and Puttershoek. There they are taken prisoner by German soldiers.  The two pilots, still in the cockpit, notice that the plane now flies too low to jump and  go for a successful emergency landing near the village of Willemsdorp, near Rotterdam and the Moerdijk bridge.  Here the pilots, too, are taken prisoner by the Germans.  Five days after the crash, during the breakdown work on the wreck,  the tenth member of the crew is found.  He had been killed by bullets from the German guns. His body was buried at the Crooswijk cemetery in Rotterdam, and later reburied at the American War Cemetery in Margraten, Limburg.  There his grave can be visited.