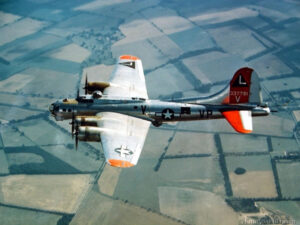 On this day from various English RAF airfields nearly 350 American bombers take off in order to bomb the German city of Munster. They fly over the Northern part of Holland and reach their target in Germany.  After bombing the city they fly back to base over the Southern provinces of Holland. One of the planes is from 331 Bomb Squadron, 94 Bomb Group, type Boeing B 17-G, marked QE-K, reg.nr. 42-39868.  Over the Hollands Diep near Hoekse Waard the plane is attacked by German fighters and catches fire. Four members of the crew succeed in leaving the plane. Just after that, hanging on their parachutes,  they hear the plane above them explode and see  the fragments of the plane fall all over a large area near the harbour and in the Molen polder near Numansdorp.  From different parts of the plane 6 bodies are recovered by German soldiers and buried at Crooswijk cemetery in Rotterdam.  After the war 5 bodies are reburied at the American War Cemetery at Margraten, Limburg.  In 1949, at the request of the family, one body was taken to his home town of Tarnaqua in the USA. The graves can all be visited.  The body of one of the crew has never been found.  His name is on the Wall of Missing at Margraten Cemetery, Limburg. 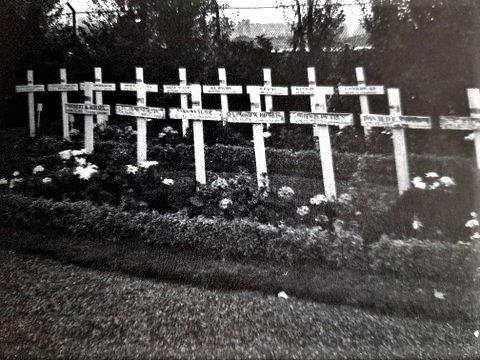