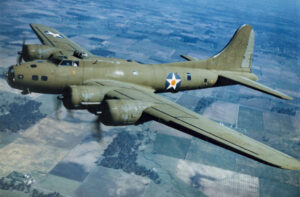 On this day 500 American bombers take off from various RAF bases with, among other places,  the German towns of Gelsenkirchen and Munster as their targets. On their way to the targets they fly over the North of the Netherlands, and after bombing their targets they return home over the Southern part of Holland. One of he bombers of 535 Bomber Squadron, 381 Bomber Group, is a Flying Fortress type B 17-G, marked MS-V , reg. nr 42.30852,  which took off at 11.00 a.m.  from RAF base Ridgewell, England.  Over Germany the plane takes 10 direct hits from German AA guns.  Because of its lower air speed, the plane has to leave the formation. Flying low over North Brabant, the plane is attacked again by a German fighter and bursts into flames. Some of the crew jump from the burning plane and descend on their parachutes. Just after they have left the plane, it goes down into Hollands Diep, near the village of Klundert. Three members of the crew survive the crash, the bodies of 6 crew members have never been found. The tenth crew member was recovered from Hollands Diep on October 10, 1945. This body was at first buried at Oosterhout, but later in the American War Cemetery at Margraten, Limburg, where his grave can be visited. The names of the missing crew are to be found on the WALL of MISSING at the American Cemetery at Margraten.