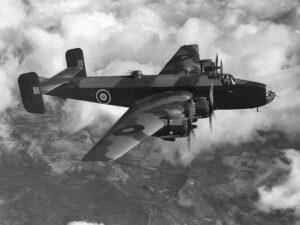 In this night 569 bombers from various RAF squadrons of Bomber Command were ordered to bomb the German city of Kassel.  Among these bombers was one from squadron 158, type Handley Page Halifax, leaving from RAF base Rufforth, Yorkshire, England.  After dropping its bombs, thereby killing 5,600 citizens of Kassel, while another 3,300 people went missing,  the plane was hit on its way back by Flak AA fire over the Hoekse Waard (island South of Rotterdam)  at 2.00 a.m., and crashed near Goudswaard.  All 7 crew were killed.  The next morning the bodies were found and  removed by German soldiers, who took the bodies to the graveyard of Crooswijk, Rotterdam. The graves can be visited there.