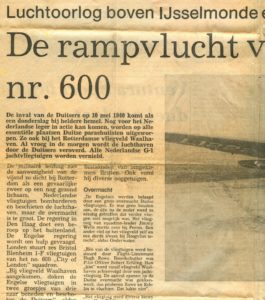 On Friday may 10, 1940, Germany invades the Netherlands.  The Dutch Royal Air Force Command asks the Royal Air Force for support.  This is supplied that same day by  6 aircraft, type Bristol Blenheim, RAF squadron 600, leaving Manston Air Force base.  These are twin-engined fighter-bombers. Their goal is the airport of Waalhaven, near Rotterdam. Arriving there they drop their bombs on German planes which had just landed there. Suddenly German Messerschmitt fighters appear and open fire at the 6 Blenheims. Five of these are downed. One of them crashes near the village of Piershil. Dutch soldiers  and civilians go to the spot and get the pilot out, who is then taken to an emergency hospital at Oud-Beyerland (near Rotterdam).  The second crew member, gunner P/O  W.H.Echlin, was killed. That same day he was buried in the graveyard of Piershil. His grave can be visited there.