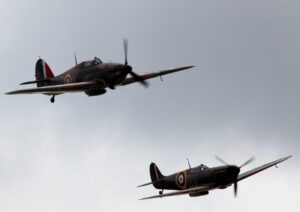 On Saturday March 17, 1945, late in the morning, 12 Spitfires of this squadron took off from RAF base Ludham in England, among them Warrant Officer Jack Dawson Green in Spitfire XT H sm473. They flew towards Holland where bombing the railway line Utrecht – The Hague was their target. Arriving over the target in the surroundings of Utrecht, they destroyed several enemy positions around the railway line. They then flew back to Ursel in Belgium, where the airport was controlled by the Allies. After a meal and preparing the planes for a second sortie, they flew for the second time to Holland early in the afternoon. After the second bombing attack on the railway line near Utrecht they returned to Ursel. Arriving at the bridge at Barendrecht Jack spotted a German Army truck on the road to Blaakschedijk, and requested permission to attack it. The commanding officer refused this permission and ordered Jack to fly on to Ursel. Nevertheless, Jack left the formation and turned back to open fire on the truck. At the same time on the ground, a little boy was playing with his older sister on the Gorzenweg at Blaakschedijk, and he saw the Spitfire diving on the German truck, guns firing. German soldiers got out of the truck and fired their rifles at the approaching plane. The plane turned over their heads and went down on a stretch of land that was flooded. The Germans ran to the spot to have a look at what had become of the pilot. The boy was allowed to come with them but had to wait at the nearby farmhouse, now called “The White Farm”. When the soldiers returned, they carried with them a piece of white cloth with something in it, and entered the shed near the farmhouse. Coming out they told the little boy that the white cloth was the parachute of the pilot, and that he had been inside the cloth during the transportation to the farmhouse. They had found him dead in the cockpit with a bullet hole in his forehead. Apparently he had been fatally hit in the head by a rifle bullet while diving down with his guns firing. The day after Jack was taken in a cart to the cemetery at Barendrecht where he was buried by German soldiers on Monday March 19, 1945. His grave can be visited there. His parents in Australia received a telegram a few days later, informing them that their son had gone missing during a sortie over Holland, and as late as 1947 they received the official information of his death in 1945. 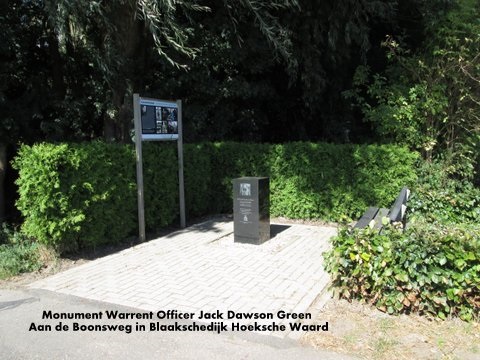