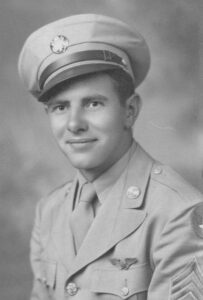 John David Petrus was born on December 30,1915 at Slatington, Lehigh County, Pennsylvania. His parents were John Lawrence Petrus and Sarah Margaret Mclaughlan. He also had two sisters Lucille (Daffner) and Alice (Prokop). His wife was Enid Elizabeth Beahm, born in Ohio, and died on November 11 (!!) 2000.

In 1928 he left primary school and attended Slatington high school which he completed in 1933. He joined the American Oil Company in his hometown. In 1941 he married Emid Elisabeth Beahm and lived at 922 Turret Street in Slatington. He was home for the last time in July 1943. In October 1943 his son David Allen was born, who has never seen his father. At the end of 1942 he enlisted the American Air Force (AAF) and followed various training courses and early September 1943 he went to England where he was assigned to the 8th Air Force, 94th Bomber Group (Heavy), 331st Bomber Squadron. He was assigned as a ball gunner, turret at the bottom of the aircraftright, to a B-17 Flying Fortress. On November 11, 1943, the crew of the B-17 with registration number 42-39868, including sgt. Petrus, was ordered to launch an attack on the city of Munster in Germany with 560 more American bombers. After the briefing, the plane took off from the R.A.F. base Bury St. Edmunds towards Germany. They arrived at the goal via the North Sea and the middle of Germany. They dropped their bombs and returned to home base. However, above the Hoeksche Waard the aircraft was attacked by three German fighter planes. The plane was hit and the left engine failed. Moments later, the entire plane was riddled. The pilot gave the order to abandon the plane, but it broke into two pieces and the front part was on fire. The pieces of the aircraft landed in the Molenpolder close to the old harbor in Numansdorp. Four crew members had left the aircraft, three of which were captured by the Germans. The fourth, Combs, came down in the Hollandsch Diep and is still missing. The other six were unable to leave the plane in time and died. Likewise Sgt. John D. Petrus. He was buried on November 15, 1943 at the Crooswijk cemetery in Rotterdam and on August 17, 1945 transferred to the American war cemetery in Margraten Limburg. In 1949, at the request of both sisters, his body was transferred to the Odd Fellows cemetery, Tamaqua, Schuylkill, Pennsylvania. His grave can still be visited there.

In december 2020 Andrew Prokop wrote:
You reached out to me several years ago in reference to my Uncle John Petrus who was KIA during WWII. Recently I became aware of another inquiry coming from Anton de man through my cousin Edward Holub. Sgt. John Petrus was my mother’s brother. She was close to her brother and felt a great deal of patriotism which I am sure was a result of the impact of her brother’s death. My mother had a standing order to place flowers on his grave each month up until her death in 2006. His remains were buried in the Odd Fellows Cemetery in Tamaqua, Pennsylvania on December 11,1949. I am in possession of the bereavement book from the funeral services as well as the American flag that was placed upon his casket and given to my grandmother. I also have the Gold Star and American flag neckerchiefs that were presented to my grandmother. I never met my Uncle since I was born after the war in 1950. My family lived with my grandmother (John’s mother) form 1952 to 1960, my grandmother died in 1971. Both my mother  and grandmother said I resembled him in physical appearance. Uncle John Petrus had a son David, who he had never met. He was born in October of 1943, His mother Caroline Keys lived with my grandmother for a couple of years after John Petrus’s death per city census data. His son David was a Viet Nam war vet. He passed away in 2006 in Tallahassee Florida per my research on Ancestry.com.  I only recall seeing son David once when I was a teenager. He came to visit my mother. I have attached a photos of John Petrus as well as a picture of his grave stone. I would like to thank you for reaching out to my family and am thrilled to see the citizens of the Netherlands establishing a memorial. I hope that some day we can visit the memorial site (planning to be in the Netherlands in May of 2022).  Let me know if I can be of further assistance. Stay safe, Andrew Prokop.
Clipping ‘Killed in Raid’ 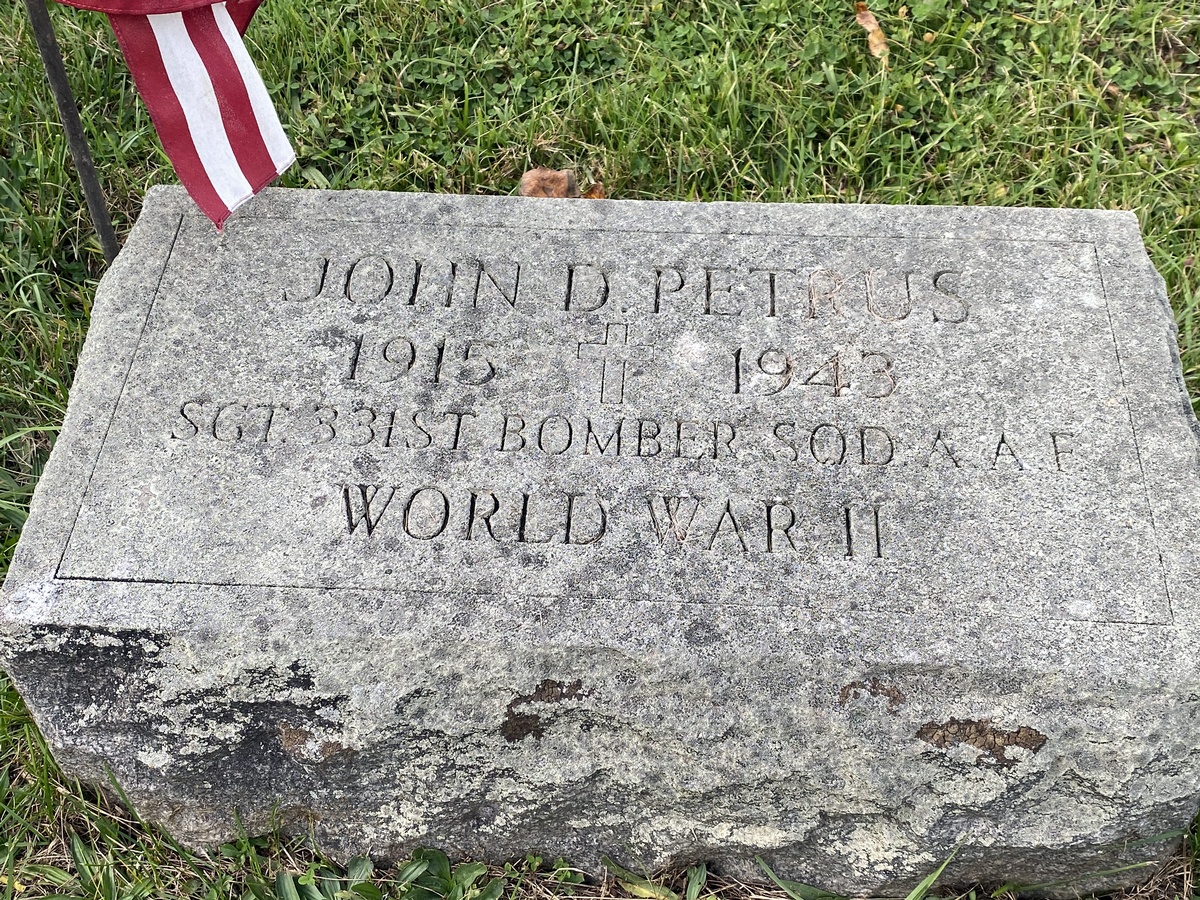 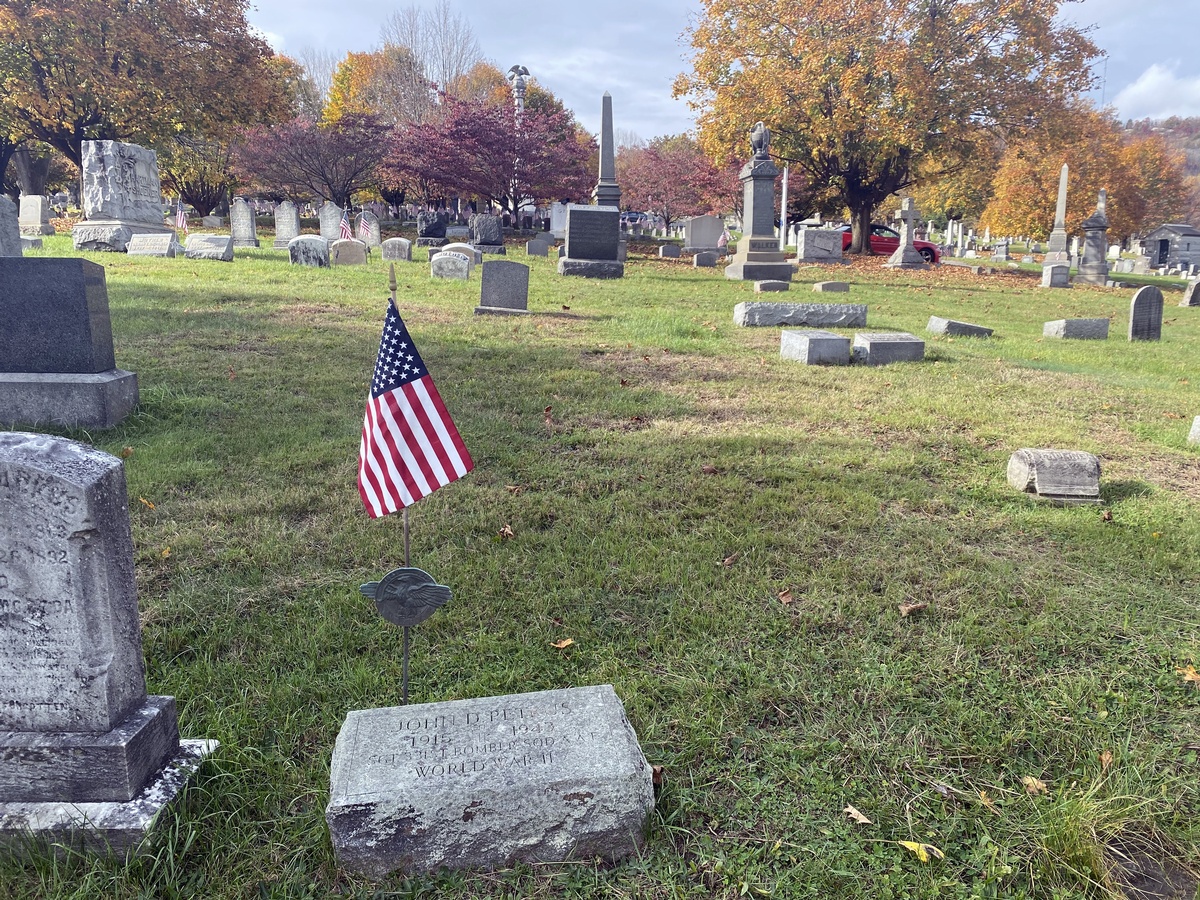