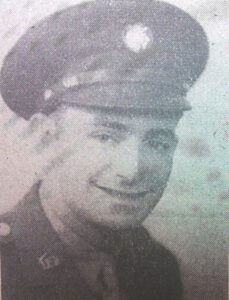 Herman Adam Jeschke was born on June 22, 1917 at Philadelphia Pennsylvania. His father was Max Jeschke and his mother was called Christina. He also had two brothers, Christian and William H. and two sisters, Clara and Wanda A. Jeschke. In 1929 he left primary school and attended the high school which he completed in 1934. He started working in a furniture store as a prospective salesman. In 1938 he married Elisabeth T. Gilmore and lived in Pleasantville, Atlantic County, New Jersey. Early September 1943 he went to England where he was assigned to the 8th Air Force, 94th Bomber Group (Heavy), 331st Bomber Squadron. He was assigned as flight engineer/top-gunner to a B-17 Flying Fortress. On November 11, 1943, the crew of the B-17 with registration number 42-39868, including sgt. Jeschke, was ordered to launch an attack on the city of Munster in Germany with 560 more bombers. After the briefing, the plane took off from the R.A.F. base Bury Saint Edmund towards Germany. They arrived at the goal via the North Sea and the middle of Germany. They dropped their bombs and returned to home base. However, above the Hoeksche Waard the aircraft was attacked by three German fighter planes. The plane was hit and the left engine failed. Moments later, the entire plane was riddled. The pilot gave the order to abandon the plane, but it broke into two pieces and the front part was on fire. The pieces of the aircraft landed in the Molenpolder close to the old harbor in Numansdorp. Four crew members had left the aircraft of which three were taken prisoner, the fourth came down in the Hollandsch Diep and his body is still missing. The other six were unable to leave the plane in time and died. Likewise Sgt. Herman Adam Jeschke. He was buried on September 15, 1943 at the Crooswijk cemetery in Rotterdam and on August 17, 1945 transferred to the American cemetery in Margraten Limburg where he was buried on plot J row 3 grave 8. There you can visit his grave. 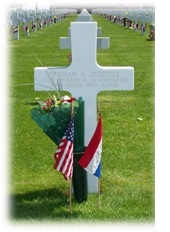