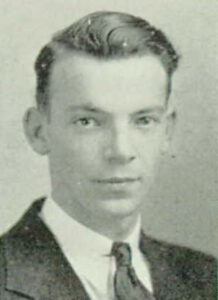 Sgt. Richard Elwood Woodyatt was born in Dixon, Lee County, Illinois. His father was George T. Woodyatt and his mother Ruth C. Woodyatt. He also had five sisters Marrie E., Polly, Irene W., Isabella, Leona E., also four brothers Clinton, John A., Bert, Leonard P. In 1928 he left primary school and attended Dixon high school which he attended. completed in 1933. He went to work as a prospective salesman in a drugstore. In 1937 he married Marquarite J. Brisbeen and continued to live in Dixon, Lee County. On October 3, 1943 he enlisted in Chicago with the American Air Force (USAAF). At the end of October 1943 he went to England where he was assigned to the 8th bomber command, 535 bomber squadron, 381 bomber groop (heavy). He was assigned as a tail gunner in a B 17F Flying Fortres. On November 5, 1943, the crew of the B 17 with registration number 42-30652 named “Blowing Bessie”, where sgt. Woodwatt, the order to launch an attack on the city of Gelsenkirchen in Germany with 721 bombers. After the briefing, the aircraft took off from the base towards Germany. They arrived at the goal via the North Sea and the middle of Germany. They dropped their bombs but were hit by heavy anti-aircraft guns. The left engine was hit and was unusable. The pilot was hit in the leg and the co-pilot took over the lead. The aircraft went back to base but lost more and more height. It could also no longer follow the formation and hit alone. Near Breda it was attacked by a German fighter plane and caught fire from the center to the tailpiece. Since the plane could no longer be saved, the co-pilot ordered the crew to jump out of the plane. Four of the ten crew members succeeded, but Richard Woodyatt, among others, failed and was still on the plane when it landed in the Dutch countryside near Strijen Sas. To date his body has not been found and his name is mentioned on the “Wall of Missing” which is at the entrance of the American cemetery in Margraten in Limburg.