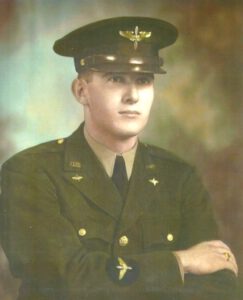 Walter C. Carr was born in Pennsylvania. His father was Herman J. Carr and his mother Margaret Lehman-Carr. He had three sisters: Doris J., Patricia and Lois R. Carr. In 1933 he left primary school and attended Dunbar Township high school which he completed in 1938. He started working as a technical lab technician. He lived in Faytte Pennsylvania. On January 7, 1942, he enlisted in the United States Air Force (USAAF) and trained as a pilot. He passed as the best of 500 classmates. At the end of 1942 he went to England where he was assigned to the 8 st bomber command, 535 bomber squadron, 381 bomber group (heavy). He was assigned as co-pilot in a B 17F Flying Fortres. On November 5, 1943, the crew of the B 17 with registration number 42-30652 named “Blowing Bessie”, which also belonged to 2nd Lieutenant Carr, was ordered to attack the city of Gelsenkirchen in Germany with 721 bombers. After the briefing, the aircraft took off from the base towards Germany. They arrived at the goal via the North Sea and the middle of Germany. They dropped their bombs but were hit by heavy anti-aircraft guns. The left engine got hit and was unusable. The pilot was also hit in the leg and the co-pilot took over the lead. The aircraft went back to base but lost more and more height. It could also no longer follow the formation and hit alone. Near Breda it was attacked by a German fighter plane and caught fire from the center to the tailpiece. Since the plane could no longer be saved, the co-pilot ordered the crew to jump out of the plane. Four of the ten crew members succeeded, but Walter Carr, among others, failed and was still on the plane when it landed in the Hollands Diep near Strijen sas. To date his body has not been found and his name is mentioned on the “Wall of Missing” which is located at the entrance of the American cemetery in Margraten in Limburg.