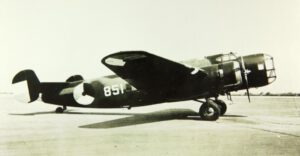 Early on Friday morning Germany invades the Netherlands and many German planes fly to Rotterdam and The Hague. The Dutch air force is approaching German aircraft from Schiphol airport with a number of Fokker aircraft and are fighting above the Waalhaven airport near Rotterdam. The Dutch Fokker aircraft drop their bombs on German aircraft parked at Waalhaven airport. It is an unequal battle because the German force is too great. Yet the Dutch planes continue to fight. The Fokker with registration number TV 862 with 1st Lieutenant pilot Fokke Groen as pilot is one of the Dutch aircraft. During a fight with a German Messerschmitt, the aircraft of Pilot Green was hit and caught fire. He could not keep the plane in the air and crashed on the Langeweg in Oud-Beijerland. Citizens who soon arrived at the aircraft found no survivors. All four crew members were dead. Their names are on one of the panels on the monument. They were initially buried in Oud-Beijerland but later reburied in the place where they lived. Their graves can be visited at the cemetery in The Hague, Vucht, Velsen and Warnsveld.