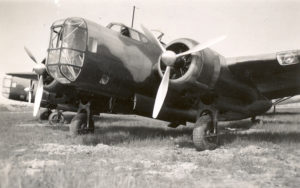 On this Friday, May 10, 1940, early in the morning, Germany invades The Netherlands and many German planes fly to Rotterdam and The Hague. The Dutch Air Force takes off from Schiphol airport with a number of Fokker airplanes and engages the enemy over the airport of Waalhaven, near Rotterdam. The Dutch planes drop their bombs on German planes parked in the airport. It is an unequal fight, because the German superiority in the air is overwhelming. Yet the Dutch planes fight on. The Fokker T5 bomber with reg. nr. TV 854 flown by 2  Lt/pilot Frans Stoovelaar among the Dutch force.  During a fight with a German Messerschmitt pilot Stoovelaar’s plane is hit and catches fire.  He could not keep the plane in the air and crashed in the Lange Road, in the village of Oud-Beyerland.  Civilians who approached the burning plane quickly found no survivors, all 4 of the crew had been killed.  Their names are on one of the panels of the monument. At first they were buried at Oud-Beyerland, but later the bodies were reburied in their home towns. Their graves can be visited at  Amsterdam, Grebbeberg and Zeist.